「獅城的熱狗」正式推出 Release Of “Hot Dogs in the Lion City"

The article features comprehensive text and photo coverage on the Singaporean Volvo Olympian non-air-conditioned buses. In addition, a Singaporean local bus enthusiast and a Hong Kong-based bus enthusiasts who often travel there to experience “hot dogs" share with us their impression and memories with those “hot dogs".

It is reported that the retirement “deadline" of the remaining non-air-conditioned buses operated by SBS Transit of Singapore has once again been postponed. The non-air-conditioned fleet will not be completely phased out within April. However, it is advised that those who would like to try out the Volvo Olympians themselves should go there asap, as the new deadline is still uncertain.

Hot Dog Impression’s “Hot Dogs in the Lion City" feature article is scheduled to be released in early May. Please stay tuned. 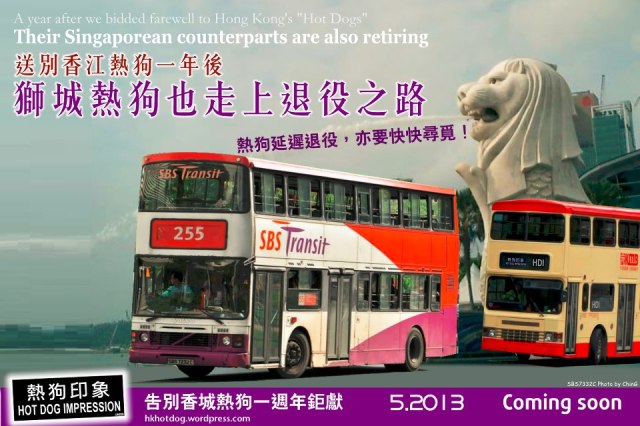 半年前後 Before and after 6 months

6 months have already passed since the full phase-out of non-air-conditioned buses from revenue-earning services in Hong Kong. I believe that most of us still hold the fond memories they had on board the “hot dog" buses to their hearts, and this could be a golden opportunity to reminisce about the past ..

(Some asked as if Hot Dog Impression will cease operation after the full air-conditionization of HK bus fleet. Our answer is NO. We will continue to enrich the site, so stay tuned!)

Starting from the 1920s, the Star Ferry Bus Terminus in Tsim Sha Tsui has always been the most important transport interchange in Kowloon. For the past 90 years, the terminus has enabled smooth and seamless connection between buses, ferries and even the Kowloon-Canton Railway.

It has no doubt that the Star Ferry Bus Terminus, along with the surroundings, is one of the most vital landmarks of Hong Kong, and is also the common memory of different generations of Hong Kongers. The terminus also witnessed the evolution of bus service in Hong Kong, and a number of routes terminating there are the last ones which provided non-air-conditioned bus service.

We express our satisfaction over the Government’s decision of permanently shelving the plans of converting Star Ferry Bus Terminus into a tourism piazza; This is no doubt the victory of the citizens. We would also like express our deepest gratitude to “Our Bus Terminal" as well as all those who have played a role in fighting for the preservation of the terminus.

Singapore, a city-state similar to Hong Kong in many aspects, will bid farewell to her non-air-conditioned buses not long after the demise of “hot dog" bus service in Hong Kong.

Hot Dog Impression is going to launch a special compilation of Singapore non-air-conditioned buses. Before that, you may be interested in the “Public Transport Hub" Facebook page which contains an excellent collection of Singaporean bus photos.

Two feature articles about non-air-con buses are now available on Hot Dog Impression WordPress site. “Hot Dog Finale" is a complete record of what happened on May 8, 2012, the last ever day of non-air-con bus service in HK, while “The Tai Po Miracle" talks about how route 71S, previously neglected by many, became the spotlight among the local bus enthusiast fraternity.

We will be launching a number of feature articles on our site in the near future. If you have any suggestion on what topic the articles should be about, please feel free to tell us.

Although Hot Dog Buses are no longer in service nowadays, we can still reminisce about our Hot Dog memories in computer games like OMSI.
Hot Dog Impression is now launching a series of OMSI Bus Simulator game addons like repaints of non air-con buses with allover advertisements. You can download these repaints from the HDI resources site.

熱狗最後足跡 （一）The final footprints of Hot Dogs (I)

Just a month ago, at 19:26, a large crowd gathered at Star Ferry B/T. That was the last day of non-air-con bus service in Hong Kong, and what they wanted to do was to bid farewell to “hot dogs" of route 5A, and to witness that historic moment.

One month later, bus service in HK is now fully air-conditionized, and “hot dogs" no longer run on the roads of HK. However, we are sure that most Hong Kongers will still remember the old days we spent on “hot dog" buses, and the memories with “hot dog" will never fade away.

熱狗印象將繼續運作，讓大家懷緬熱狗歲月，重拾往昔記憶。
Hot Dog Impression will continue to operate even though all “hot dogs" are pulled out of service.

熱狗走到最後 敬請互相遷就 Be considerate when bidding farewell to “hot dogs"

As the bus service in Hong Kong will soon be fully air-conditionized, a lot of bus enthusiasts and ordinary Hong Kongers are keen to take or photograph “hot dog" buses in order to reminisce the good old days.

We would like to call upon all bus enthusiasts to be considerate when taking or photographing non air-con buses. Refrain from yelling as well as causing nuisance to other bus enthusiasts, passengers, bus company staff or other road users.